Introducing the ultimate creepy crawly - the spider. The most common spider found on properties would be the harmless Daddy Long Legs and the common Black House Spider. In Victoria, the Red Back Spider would be considered the most dangerous spider as its bite is highly venomous. Here are some spiders you should be cautious of:

This spider is commonly found outdoors around human habitation, in such places as rubbish, litter, old tins, containers under and on steps of the veranda, and on or under the seats of outdoor toilets. Storage stacks and disused furniture will also encourage the breeding of this spider.

Outdoors, nests can be found under logs, bark, sides of rocks, etc. As the spider rarely leaves its web, humans are not likely to be bitten unless some part of the body (e.g. the hand) is put into the web. Always check before moving items that have been stored outdoors for some time. Wear gloves when cleaning up rubbish areas.

The female produces up to ten pale-yellow egg sacs, each with approximately 250 eggs. Females may live for two to three years, males about 90 days.

Male: Usually without red markings. Light brown body with white markings on the upperside of abdomen, and pale hour-glass marking on the underside.

Female: Body and legs dark brown to black. Characteristic red hour-glass marking on the underside of abdomen, usually also with broad, red stripe on the upperside of the rear half of the abdomen - the red stripe is sometimes broken. Juveniles are recognised by the white markings on the abdomen.

The bite is highly venomous and characterised by intense localised pain and around the bite site. Other symptoms may include sweating, muscular weakness, loss of co-ordination and, in severe cases nausea, vomiting, convulsions, etc. The following envenomation description is from The Australian Animal Toxins by Struan Sutherland, 1983.

Signs and Symptoms: The normal sequence of events after a bite is as follows. A sharp pin-pricking pain is almost invariable. Usually the bite site becomes hot, erythema and oedema develop rapidly. Localized sweating often occurs. The swelling is generally limited to an area of several cm in radius from the bite site; occasionally it is extreme.

Approximately five minutes after the bite, intense local pain commences and increases in severity and distribution. In most cases, pain is the predominant symptom; the patient is sometimes distraught and even hysterical because of its intensity. Movement of the affected limb often significantly increases the pain.

About thirty minutes after the bite, pain and swelling are often experienced in the regional lymph nodes. If abdominal pain occurs, it is worse when the lower extremities or genitals were bitten, probably due to lymph node involvement. Sometimes severe pain develops in parts remote from the bite site, for example, in an opposite limb or the opposite side of the trunk. Uncommon, even bizarre, signs and symptoms developed in some cases. There were tetanic spasms, tingling in the teeth, swelling of the tongue, bite site infection, convulsions, excessive thirst, severe diarrhoea, anaphylactic reaction to the venom, blotchy rash on face, haemoptysis, dyspnoea, dysuria, severe trismus, persistent anorexia, periorbital oedema and/or conjunctivas. Patchy areas of what was described as ‘bizarre sweating’ were not uncommon.

The white tailed spider is a vagrant hunter which feeds mainly on other spiders. It is nocturnally active and is commonly found in the bedroom. During daylight hours, the spider will hide in dark places. Indoors, this includes clothes that have been left lying about and bites may occur when these clothes are subsequently used. Outdoors, the spider can be found under the bark of trees and under rocks.

During periods of quiescence such as moulting and egg laying, the spider spins a silken sac-like retreat. The eggs, which have a pinkish hue, are encased in a flattened silk capsule and guarded by the female until hatching.

Male: Similar to female but with two pairs of pale spots always present on the abdomen and a dark, oval plate toward the front of abdomen on the upperside.

Female: Dark grey body, legs with reddish brown tinge, abdomen with dull white patch at tip and sometimes with more or less distinct paired pale spots on the middle of the abdomen.

Does not build a web.

Bites are relatively frequent due to its wandering nature. Symptoms range from no reaction to swelling and local blistering at the bite site and nausea. The white tailed spider has been suggested as a culprit in rare cases of large scale necrotic lesions but there is little supporting evidence. 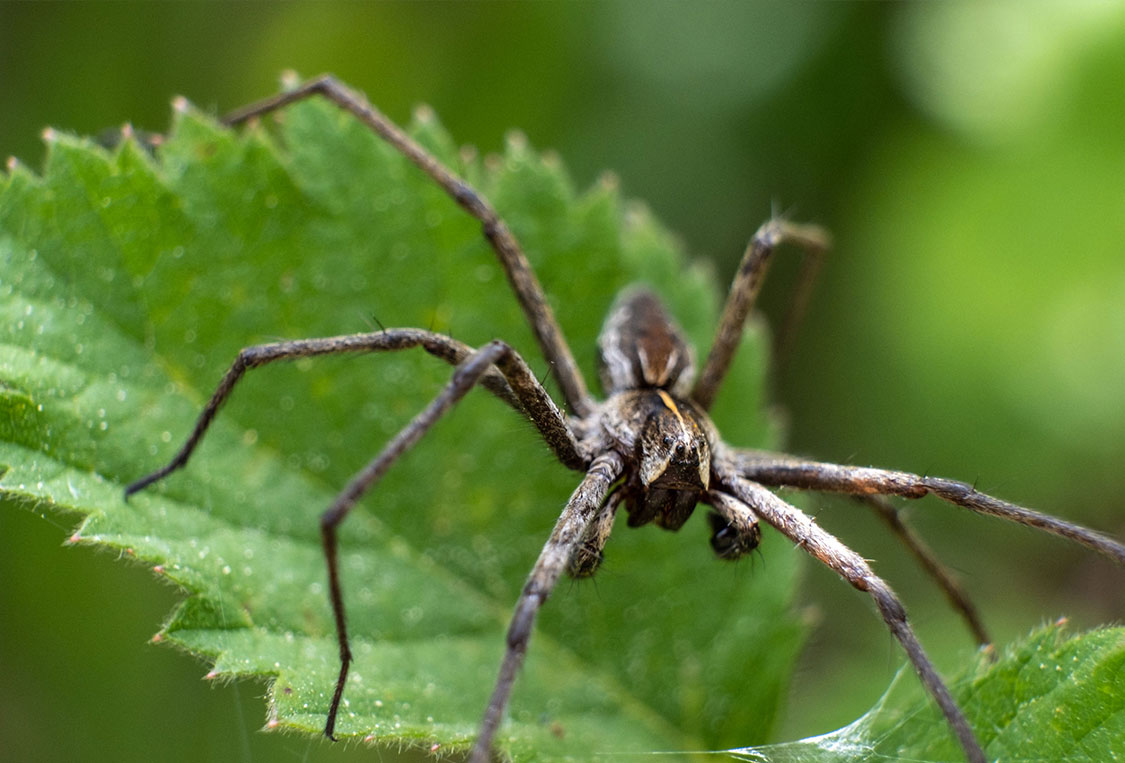 This huntsman spider or Holconia is one of the most commonly found spiders in houses where it hunts at night on walls and ceilings. It also occasionally enters the cabins of vehicles, causing much alarm. In the bush, it can be found sheltering during the day beneath the loose bark of eucalypts.

It is a large species and when alarmed, is capable of moving very rapidly - often in a sideways direction. Their diet consists of insects and other invertebrates. The egg sac is flat, oval and constructed of white papery silk. It is most commonly deposited beneath the bark of trees. The lifespan of this species is about two years.

Female: Brown to grey with several pairs of darker spots on the upperside of the abdomen, sometimes with dark bands on the legs.

Does not build a web.

This is a timid spider and bites are infrequent. Symptoms are minor, including local pain and swelling.